Hold on, hold on. I know what some of you are thinking.

“Young lady,” you might begin (you may, of course, substitute “old lady” at your discretion,) “‘BBQ’ and ‘stir-fry’ are antithetical. They simply cannot exist in the same time and space.”

Thanks to extensive travels in the South and West, I have learned over the years that BBQ is a process, not a sauce. It is a mindset: Low and slow, as opposed to stir-fry’s Hot and Fast.  BBQ can be a religion and a way of life. One may not simply slather some sauce on food and call it “BBQ,” despite what my sensible mid-western upbringing may have taught me.

However, the title “BBQ Stir-Fry” is far shorter and perhaps far catchier than the more accurate description of, “Open-Faced Bagel Sandwich with Stir-Fried Veggies and Shredded Chicken Which Was Then Simmered in Whiskey and Finally, BBQ Sauce, and Generously Covered in Cheddar Cheese.”

I hope we can get past this small hurdle so early on in our relationship, and again, I really am sorry. Honestly, there is a quasi-recipe down there at the bottom, underneath the story I’m about to tell you. If you’re more curious about what the heck I’m talking about with this BBQ Stir-Fry nonsense than about my failures in the kitchen, skip right down there.

Last night, I completely obliterated a whole broiler chicken, all five pounds of it. First by undercooking it, then by overcooking it. I rendered it nearly inedible. Coming home from work tonight, casting about for something to feed Mike Neir other than a bowl of cereal, I stared at the dried-out carcass. It mocked me.

You have to understand something; I’ve been vegetarian since 2003. I haven’t done any meat cooking in that time, and to be honest, I didn’t do a lot of Cooking Real Meat in my younger adult years, either. Thus, when I began the practice of cooking chickens for Mike Neir, he was a.) quite surprised, b.) quite pleased and c.) quite grateful. Each time I’ve made a chicken, he has remarked on its tender juiciness and whatever flavoring I have added to it. Not so last night, and deservedly. Oh, how I failed.

It began with not having taken the chicken out to thaw until I got home from work, and then thawing it out in about an hour in warm water (I know – safe thawing practices went into the toilet, I know.) By the time it was thawed, it was after 7pm. I threw it and a bunch of coarsely chopped veggies into the roasting pan at 400 degrees for 45 minutes, which is usually very close to sufficient cooking time in the Graniteware roasting pan. How I love that pan. 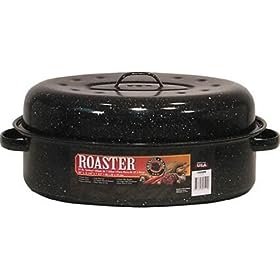 At 45 minutes, I took the temperature at various places on the bird, all of which were right around 155 degrees – nearly perfect. Juices ran clear. I carved. I carved the breast and discovered that underneath its glistening, clear-running juices was a core of raw flesh near the bone. Shit. The breasts themselves had only the merest hint of pink toward the innermost core. I toyed with what to do. It was after 8pm. Screw it, I carved it and stuck the bits into the microwave.

While the microwave did a wonderful job of cooking the chicken through, it also rendered the flesh wholly unappealing. It make it tough and rubbery. Poor, poor Mike Neir and his stupid, under/over-cooked chicken.

I’d stuck the whole bird back into the oven to finish up. And then I went upstairs.

Where I forgot to set the timer.

And I left it there for, oh, perhaps another hour.

When I finally remembered it was in there, everything in the pan was, shall we say, “done.”

Disgusted, I threw it all in the fridge, pan and all (I know – one shouldn’t store meat overnight on the bone. I don’t know why, mind you, but it was always just something one didn’t do for some reason or another. At least in my family.)

This brings us back, finally, to tonight – and I’m very sorry about the lengthy diatribe, but I apparently really needed to tell you all that to tell you the following, which makes the digression about eleventy-five percent longer than the actual substance I started to write about.

I sauteed the veggies, garlic and onion at high, stir-fry temperatures in olive oil until they were mostly tender, then threw in the shredded chicken until it was warm.

Then, I doused the whole affair generously, very generously, with Jack Daniels and let it simmer for a few minutes.

Next, I up-ended Mike’s bottle of KC Masterpiece BBQ sauce (I know!!! But it’s what he likes!) and liberally squeezed. I squeezed what can casually be referred to as BBQ sauce over that pan as if to drown it. Then I simmered it all together so it would slightly marry whilst heating the frozen peas and putting a bagel in the toaster.

Bagel open-faced on plate, BBQ-sauce-covered stir-fry slathered on top of that so as to render the bagel small and insignificant. Heaps of cheddar cheese on top of that, the likes of which would make a glutton blush.

Mike Neir approves. Or so he says – he may be trying to bolster my flagging ego after last night’s abomination.

I didn’t take any photos, because a.) it really didn’t look all that appetizing, 2.) it’s dark outside and food photographed with on-camera flash looks wretched, and III.) I am le tired. Instead, please enjoy this gratuitous photo of a cute puppy sleeping on a Hello Kitty pillow: