Because I’m new to This Canning Thing, I’m not fully equipped properly. For instance, I don’t have “a canning pot,” which is somewhat, y’know, important for the whole process. A canning pot is very, very huge. It’s tall enough to fully cover quart-sized jars with at least an inch of boiling water on top of them, and comes with a little rack to keep the jars off the direct heat of the burner.

Instead, I had a pot (which I previously believed to be larger than anything I’d ever need, ha ha) and a vegetable steamer. It covered the jars with a bit less than an inch of water on top, but I’m willing to live on the edge a little, here, since the brine is very salty and very acidic.

The following pictures are just awful. Worse than the first post’s, because it was getting dark and I needed to use a flash. Plus, I was balancing boiling-hot things in one hand with a camera in the other. Please forgive me. The Pioneer Woman, I ain’t.

Previously, I had acquired the Ball Blue Book (The Guide to Home Canning and Freezing) to help me in my endeavors, as well as a Ball Jar Utensil Set: 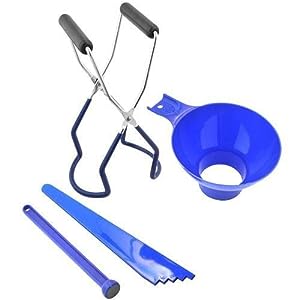 That should tide me over, right?

I boiled the empty jars a good long while to sterilize them. While they were coming up to temperature, I rinsed the cucumbers and onions several times to get the salt coating off of them. Also, I scrubbed my kitchen sink today for the first time in a coon’s age. I had to get photographic evidence. The veggies went into a pot with aromatics, vinegar and sugar and came to a boil. I had no allspice berries or celery seed, so I used coriander seed and a bit more mustard seed. When the pickles came to a boil,  I cranked my hand open as wide as humanly possible, not unlike a snake unhinging its jaw, to gently remove the jar from the hot water bath with tongs. Then, I had a jar full of boiling hot water in one hand, a camera in the other and no good way to empty the hot water without causing injury or equipment damage. Put the camera down. Got the jar in place for filling, using the handy-dandy SUPERBLUE wide-mouthed funnel. There is evidently a small amount of Science involved with “headspace,” or the amount of empty space left at the top of the jar. The veggies go in and one leaves an inch of headspace. Then the brine, and a half-inch headspace. Happily, the Bell canning kit included a Highly-Specialized Device to remove air bubbles and to measure “headspace.” I made something way fancier than this in seventh grade plastics shop class, man.

Ok, it was a bookmark in the shape of a unicorn, but dammit, it was way harder to make than this thing. There is also a magnetic lid-grabbing device. I could have used the magnetic wand out of my toolbox, but I reckon it wouldn’t be sanitary. The last thing that magnet grabbed was a nut I dropped into the crank case on my BMW K1100RS. Thankfully, the nut was indeed magnetic. Otherwise… ok, I’m topic drifting here. In the end, even though the recipe promised five pints, it only made three and a half. I didn’t hot-water-process two of them, and will keep them in the fridge. The other one and a half, I boiled for 10 minutes and am letting cool at room temperature. One of them sealed in the bath, the other (the only half-filled-with-pickles one, which did get a full dose of brine) hadn’t yet sealed. If it doesn’t, I’ll throw it into the fridge, too. As it turns out, there is too much surface area on this volume of water for my stove to keep boiling without a lid. Not finding the lid for this particular pot handy, I had to improvise. Thank goodness for cookie sheets. There was an abundance of left-over pickle juice, and it seemed a shame to throw it away. I flashed back to a conversation Mike Neir and I had a day or two ago in the car, about how pickle juice makes a nice bloody mary additive.

Personally, I would rather chew off my own legs than drink a bloody mary; however, I understand many people find them delicious.

Mike Neir: Oo. That they do.

He came upstairs to make it, since I’d more easily land a jetliner than make one. He strained out all the seeds and onions and whatnot, and proceeded to fill the rest of the glass up with V8 (gack.) Oh, and of course, Worchester sauce (WTF!!) Choking back a gag reflex (ironic phrasing, no?) I asked:

Me: Do you want me to save the rest of the juice?

Mike Neir: Nah, I shouldn’t have more than one of these. They have a crapton of salt, and I do value my heart.

And then… and then, he didn’t even put any alcohol in it. He just drank … shudder… the V8 and the pickle juice. I threw up a little in my own mouth at that point, I think.

Mike Neir: Why does that, the fact there’s no alcohol, make it worse?

Me: Because there’s… there’s no point to it! It’s just… that stuff. In a glass. [I made a mental note to refrain from applying the “toxins” category to this post.] Being they were bread and butter pickles, and not dill pickles, the juice was sweet. He wasn’t sure about that part. But deemed it tasty and there we have it.

Once the fridge pickles have cooled, I’ll give them a try, although I suspect they won’t develop good flavor until they’ve marinated in their brine for a few days. I hope they didn’t turn into mush or taste like salty toxicity. It’ll be interesting to compare the ones that weren’t hot-processed with those that were, too, in terms of taste and texture.

Also, thank goodness for central air conditioning; all that boiling water in this heat and humidity without? Forget about it.

Grow, garden, grow! Lots of experimenting to be done.